Let’s take a simple example. When you record and play an audio clip, the following happens.

You use a microphone to record the audio clip. The microphone sends your voice to the computer. Since the human voice consists of analog signals, the computer converts the received voice into digital signals before processing and storing them onto the hard disk.

When the recorded clip is played, the computer reads digital signals from the hard disk and converts them into analog signals before sending them to the speaker.

The following image shows this process.

Data modulation is not only used within the computer, but it is also used outside the computer. It allows computers to send digital signals on a media that can only carry analog signals. It converts signals in such a way that they become suitable for transport on a communication path that is not designed to carry such signals. 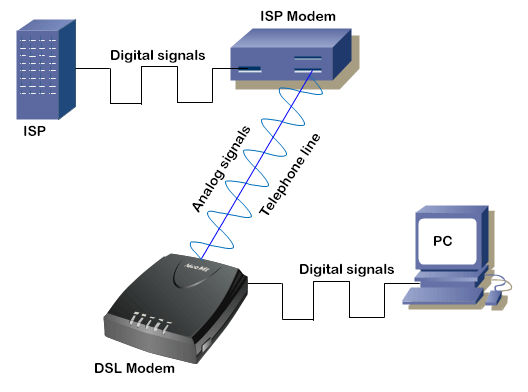 How does the data modulation work?

To understand the properties of analog and digital signals in detail, you can check the tutorial.

How analog and digital signals work

The following image shows an example of this process.

To broadcast the digital signals: –

An AM (Amplitude Modulation) radio station modifies the amplitude of the carrier wave.

An FM (Frequency Modulation) radio station modifies the frequency of the carrier wave.

To convert analog signals into digital signals, an ADC (Analog to Digital Converter) is used. An ADC is an integrated electronic circuit. It takes input analog signals and converts them in digital (binary) signals. 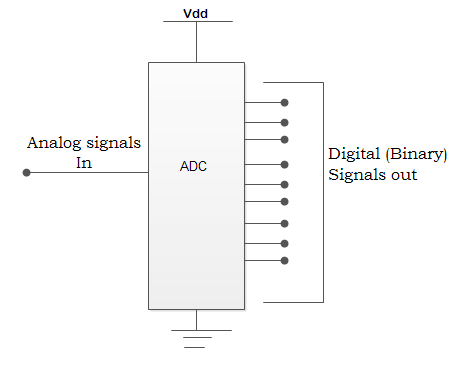 An ADC converts the output data into a series of digital values by approximating the signals with fixed precision. In each cycle of the analog signal, an ADC measures all falling and rising of signals and converts them into digital values.

To understand how an ADC converts analog signals into digital signals, think about a staircase and a ramp. A ramp is analog because it has an infinite number of heights. To construct a parallel staircase, a constructor uses sample heights of the ramp. The more samples the constructor takes, the more accurate the staircase will be.

The process of measuring height and width of steps work similarly to the process of digitizing analog signals.

That’s all for this tutorial. If you like this tutorial, please don’t forget to share it with friends through your favorite social channel.