LVM stands for Logical Volume Manager. LVM is the modern way to manage the storage devices. Traditionally a hard disk is partitioned as per requirement and each partition is formatted with supported file system. 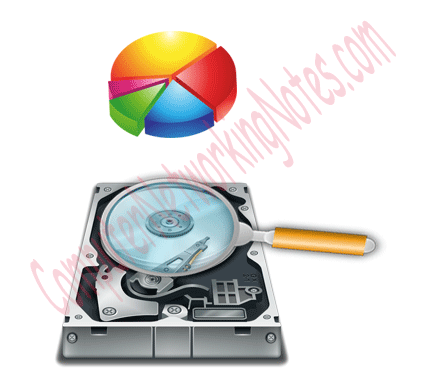 We have already learned this approach in detail with examples in previous parts of this article.

This tutorial is the sixth part of our article “Linux Disk Management Explained in Easy Language with Examples”. You can read other parts of this article here.

This is the second part of this article. This part explains how to create primary, extended and logical partitions from fdisk command in Linux step by step with examples.

This is the third part of this article. This part explains how to create GPT (GUID partition table) partitions from gdisk command in Linux step by step with examples.

This is the fourth part of this article. This part explains how to create primary, extended, logical and GPT partitions from parted command in Linux step by step with examples.

How to create SWAP partition in Linux

This is the fifth part of this article. This part explains how to create swap partition in Linux with examples including basic swap management tasks such as how to increase, mount or clear swap memory.

How to configure RAID in Linux Step by Step Guide

This is the last part of this article. This part explains basic concepts of RAID in detail with examples including how to configure and manage software RAID in Linux step by step.

LVM not only addresses all these issues but also provides several other advantages such as data snapshot which allows us to revert in previous stage if there is any failure. Let’s learn how LVM is different from classical disk management concept. 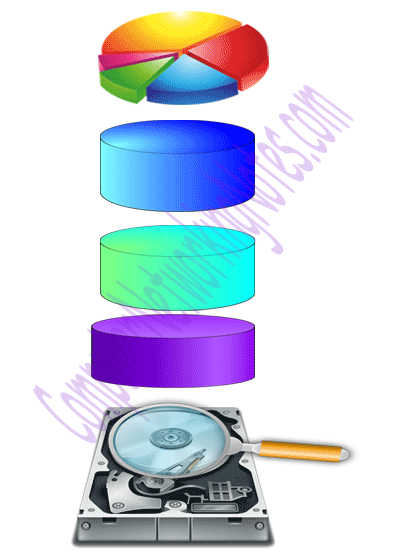 Bottom layer is built from available disk space. We can use any storage device for disk space for example we can use a partition form
disk or can use an entire disk. This layer is known as physical volume.

Middle layer is the group of all physical volumes. This layer is known as volume group. 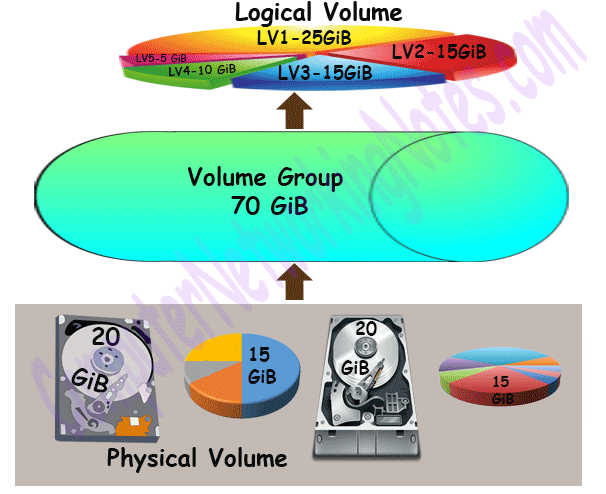 To get more detailed information about physical volume we can either use –v option with pvs command or can use pvdisplay command separately.

As we can see in above output there is only one physical volume (/dev/sda2) available at this time. To view the synthetic overview of current storage configuration we can also use lsblk command. 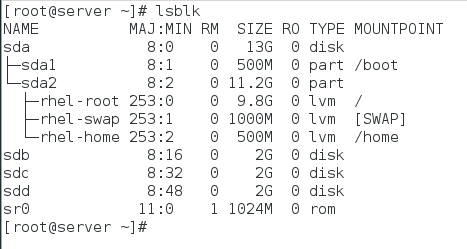 How to create a new physical volume

For this tutorial I assume that you have either non-partitioned disk space or have a separate disk for exercise. If you are using virtual program (such as VMware or Virtual Box) for the practice, I suggest you to add three new virtual hard disks. To learn how to add new virtual disk in VMware please see the first part of this tutorial.

For this exercise I have added three additional virtual disks in our system. Each disk is 2GB in size. We can list all attached hard disks with fdisk –l command. 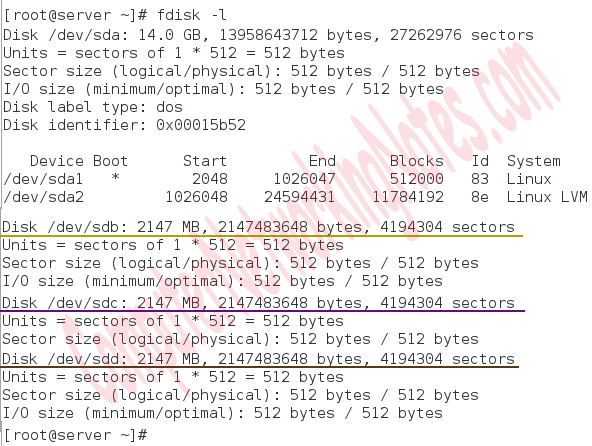 We will use two MBR partitions, two GPT partitions and one whole disk to create the physical volume.

Create a 1GiB MBR primary partition and set its type to LVM with following steps. 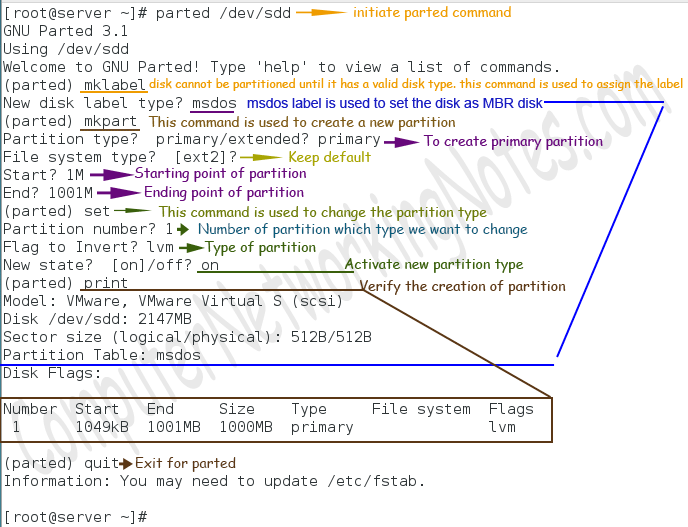 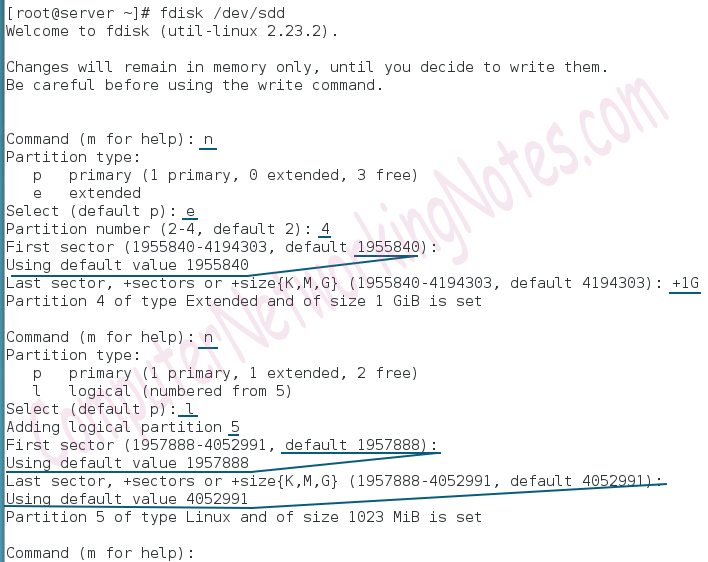 At this time partition is marked as Linux Standard Type. Let’s change its type to LVM. 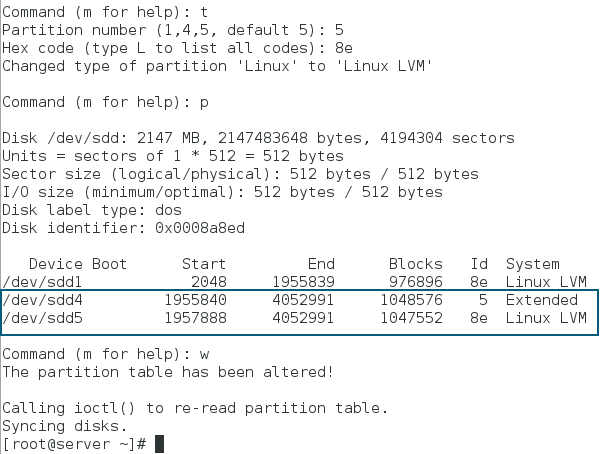 Second part of this article explains fdisk command and its sub command in detail with examples. 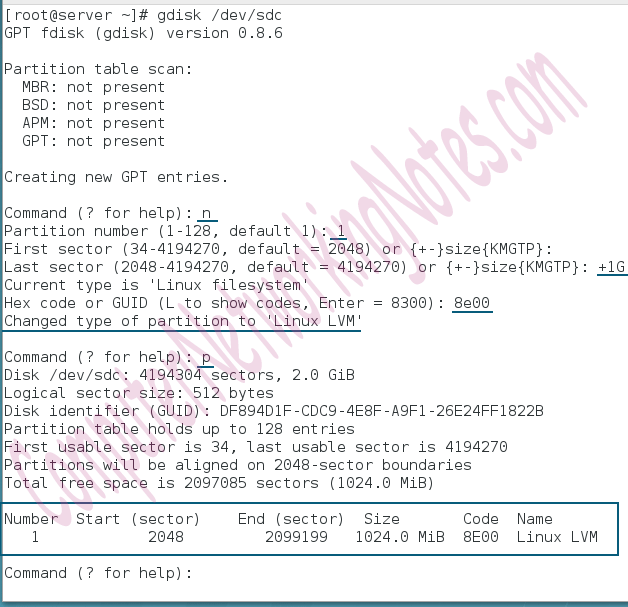 Use w command to save the changes, when asked type y to confirm the changes.

Second part of this article explains gdisk and its sub command in detail with examples. 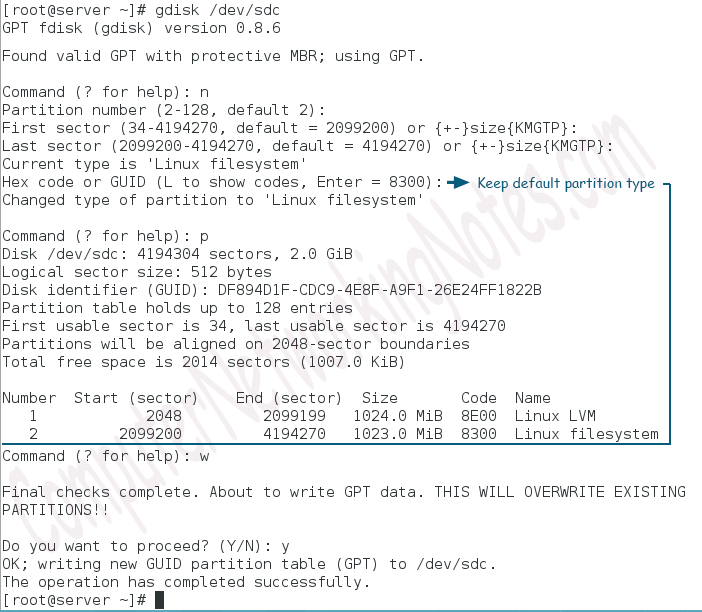 Finally run parprobe command to update the kernel about this disk configuration change.

We can use lsblk command again to verify the above configuration 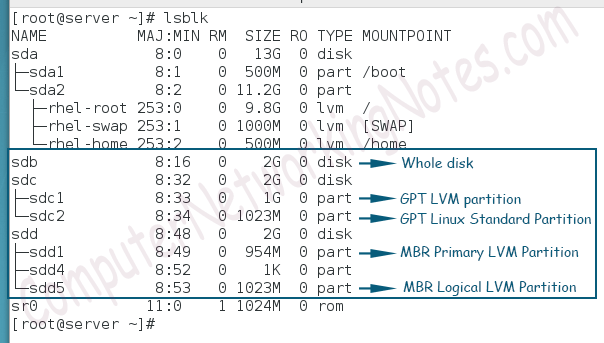 That’s all setup we need to create the physical volume.

I created above configuration to explain how different disk utilities mark a partition which will be used in LVM. A partition with LVM marking can be added directly in volume group by skipping physical volume. I will explain this method in some other tutorial. For this tutorial I am following standard procedure where you must have to create physical volume before creating volume group. When we create physical volume by following standard procedure, the partition type marking (8e, 8e00, lvm set on) or hard disk type (GPT or MBR) do not make any difference. For LVM they all are the equal source of free space. The only thing which you should consider is that LVM cleans the source of space before putting its own label in it. It is just like formatting a disk or partition before using it, once formatted all data will be wiped out from it.

How to create LVM physical volume 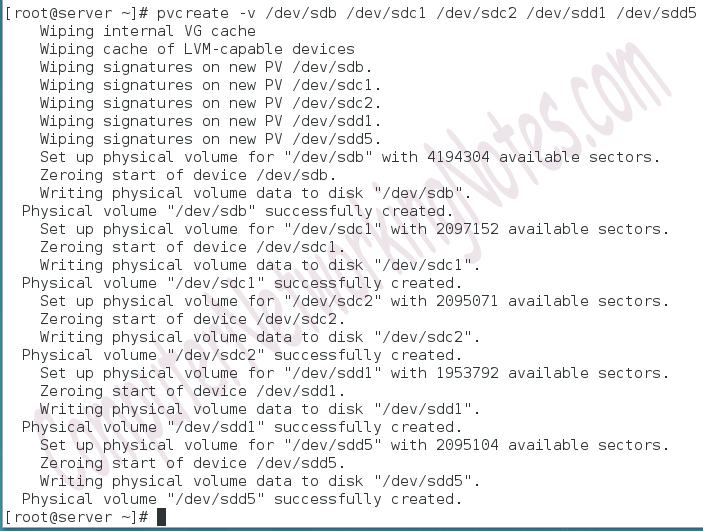 We can use pvs command again to verify the creation of physical volumes.

Following command is used to create a new volume group. 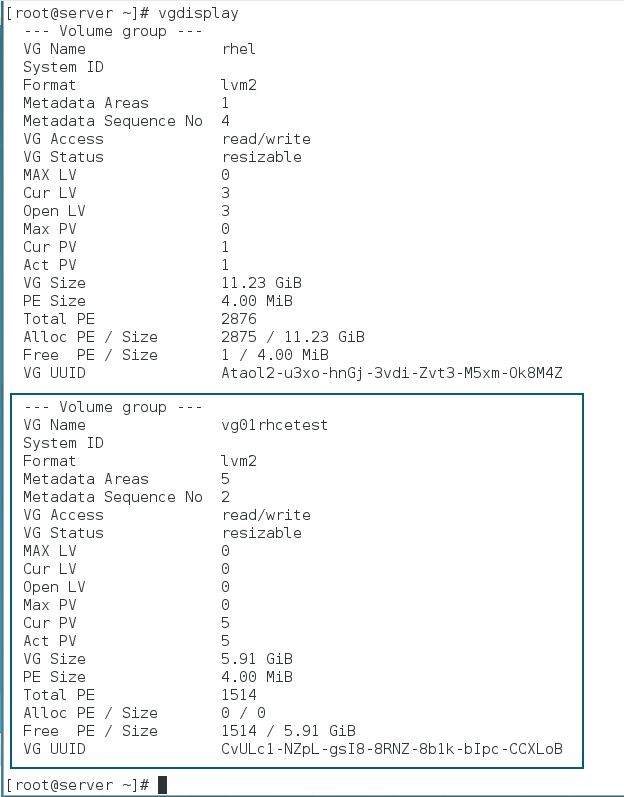 While creating a new volume group, LVM automatically divides all available space into smaller logical pieces known as Physical Extent.
A PE is the smallest unit which can be allocated in logical volume. Default size of a PE is 4MB.

Following command is used to create a new logical volume.

If command detects any file system signature, it will confirm the action before creating the logical volume. Accept the change by typing y here.

We can verify the creation of Logical Volume with lvs command

Following command is used to format a logical volume. 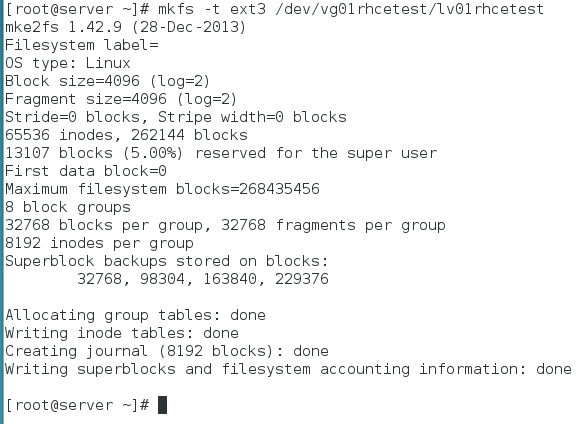 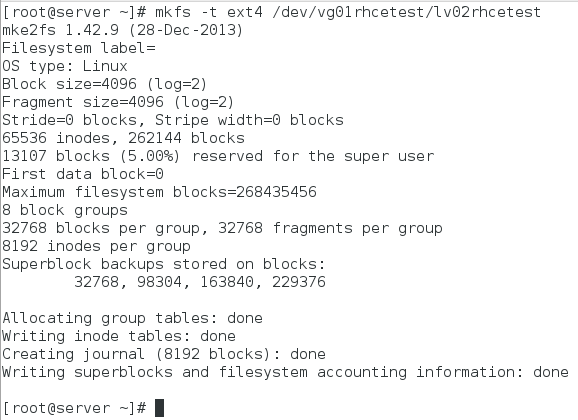 Following command is used to mount the partition temporary.

Mount command accepts several options and arguments which I will explain separately in another tutorial. For this tutorial this basic syntax is sufficient.

what to mount :- This is the partition.

where to mount :- This is the directory which will be used to access the mounted resource.

Once mounted, whatever action we will perform in mounted directory will be performed in mounted resources. Let’s understand it practically. 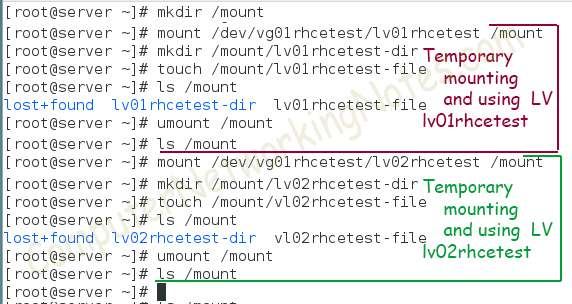 As above figure shows whatever action we performed in mount directory was actually performed in respective logical volumes.

Temporary mount option is good for logical volumes which we access occasionally. If we access LV on regular basis then this approach will
not helpful. Each time we reboot the system all temporary mounted resources are get un-mounted automatically.
So if you have a LV which is going to be used regularly, mount it permanently.

Each resource in file system has a unique ID called UUID. When mounting a LV permanently we should use UUID instead of its name. From version 7, RHEL also uses UUID instead of device name.

The UUID stands for Universally Unique Identifier. It is a 128-bit number, expressed in hexadecimal (base 16) format.

If you have a static environment, you may use device name. But if you have dynamic environment, you should always use UUID. In dynamic environment device name may change each time when system boot. For example we attached an additional SCSI disk in system; it will be named as /dev/sdb. We mounted this disk permanently with its device name. Now suppose someone else removed this disk and attached new SCSI disk in the same slot. New disk will also be named as /dev/sdb. Since name of old disk and new disk is same, new disk will be mounted at the place of old disk. This way, device name could create a serious problem in dynamic environment. But this issue can solve with UUID. No matter how we attach the resource with system, its UUID will remain always fix.

Once we know the UUID, we can use it instead of device name. We can also use copy and paste option to type the UUID.

When system boots, it looks in /etc/fstab file to find out the devices (partitions, LVs or swap)
which need to be mount in file system automatically. By default this file has entry for those partitions,
logical volumes and swap space which were created during the installation. To mount any additional LV (Logical Volume)
automatically we have to make an entry for that LV in this file. Each entry in this file has six fields.

Take the backup of fstab file and open it for editing

Make entries for logical volumes and save the file.

For demonstration purpose I used both device name and UUID to mount the logical volumes. After saving always check the entries with mount –a command. This command will mount everything listed in /etc/fstab file. So if we made any mistake while updating this file, we will get an error as the output of this command.

If you get any error as the output of mount –a command, correct that before rebooting the system. If there is no error, reboot the system.

The df –h command is used to check the available space in all mounted partitions. We can use this command to verify that all partitions are mounted correctly.

Above output confirms that we have successfully mounted all partitions.

As I mentioned in starting of this tutorial logical volumes are flexible in nature. It means we can resize them easily. Following command is used to add additional space in LV.

Let’s fill-up the one LV with some dummy data to simulate the situation where LV is filled up with data. We can use dd command to copy the null bytes from zero device file to a test file located in LV.

To understand dd command in detail, see the third part of this article.

As we can see in above output LV (lv03) is running out the space. Let’s extend it by adding 1GB additional space. 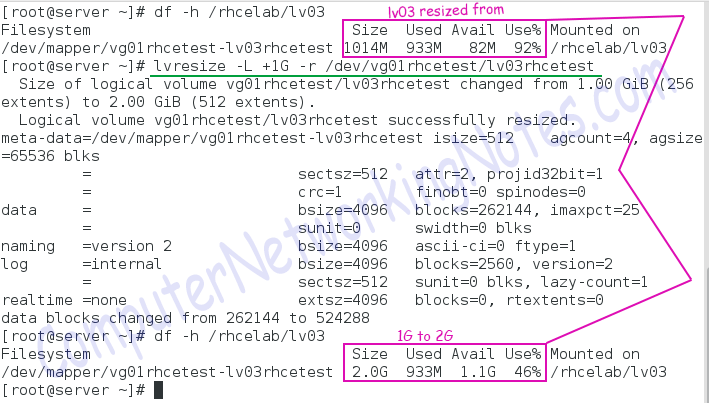 Same command is used to shrink the extra space from logical volume except the sign of size. To reduce the size we have to use – (minus) sign instead of + (plus) sign.

This command will work only if file system supports. For example xfs file system does not support shrink option. 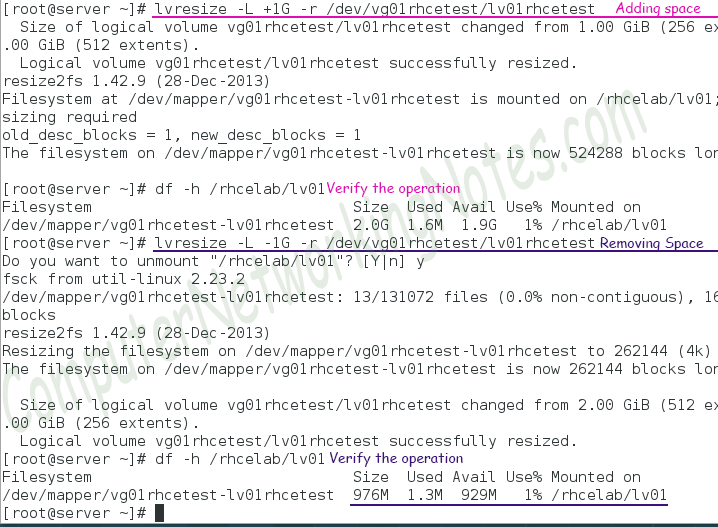 How to delete logical volumes 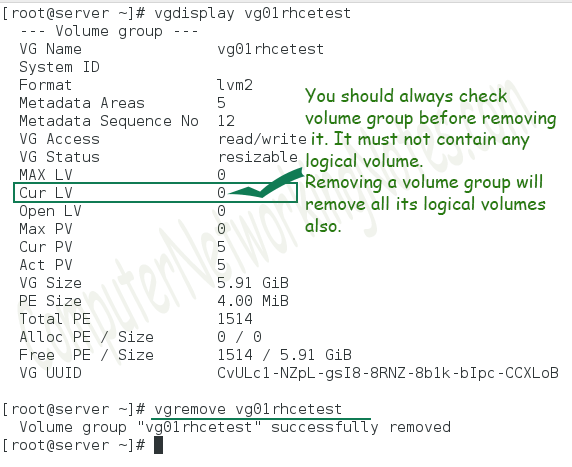 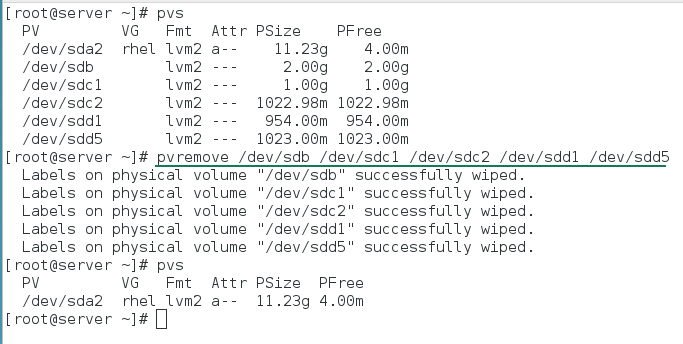 Finally remove the mount directory and copy the original fstab file back.

If you haven’t taken the backup of original fstab file, remove all entries from this file which you made.

Now reboot the system and use df –h command again to verify that all partitions which we created in this exercise are gone.

That’s all for this part. In next part we will learn how to create and manage RAID Array.