WAN is the term that is used to refer all those technology and hardware which involves in connecting multiple
network segments together. These network segments can be located far apart.
WAN is the abbreviated form of Wild Area Network.

Difference between LAN and WAN

LAN (Local Area Network) represents a small segment of
network that can be span in limited geographical area such as your home network, university campus, cyber café and office building.

WAN represents a large part of network that is not bounded by geographical location. It can be spanned in several locations. Basically WAN is made up from multiple LANs.

Another major difference between LAN and WAN is that we own LAN, but we lease WAN. In LAN we have our own space, so we can install cables, switches, routers and other connecting devices as connections require. But in WAN, connections physically pass through the other people’s property where we don’t have right to put our cables and other networking devices. So what options left for us?

We need to lease or rent connection from cable companies. Let’s understand this in other way. Suppose you are in Delhi and you want to go Jaipur by car. Will you build your own road for transportation?

This tutorial is the first part of our article \”WAN Terminology Explained with Encapsulation Protocols and Methods\”. You can read other parts of this article here.

This tutorial is the second part of the article. This part explains HDLC (High-Level Data Link Control) protocol and encapsulation method in detail with examples including step by step configuration guide.

This tutorial is the third part of the article. This part explains PPP (Point to Point) protocol and encapsulation method in detail with examples including step by step configuration guide.

This tutorial is the fourth part of the article. This part explains basic concepts of Frame Relay such as LMI Types, DLCI, Access Rate, CIR rate, PVC, SVC and network type in easy language.

How to configure Frame Relay Step by Step Guide

This tutorial is the last part of the article. This part provide step by step guide on how to configure Frame Relay in Cisco routers.

Before we understand WAN networking concepts in detail, let’s be familiar with some basic WAN Network terminology.

CPE (Customer premises equipment) is the device that is located in subscriber’s premise such as modem, switches, CSU/DSU, DTE router and NT1.

DP (Demarcation point) is the spot, from where responsibility of customer and Cable Network Company divides. Usually it is a device installed by telecommunication (Cable Network) company. In simple terms, it’s a delivery point where LAN delivers or receives data packet from Telecommunication Company. 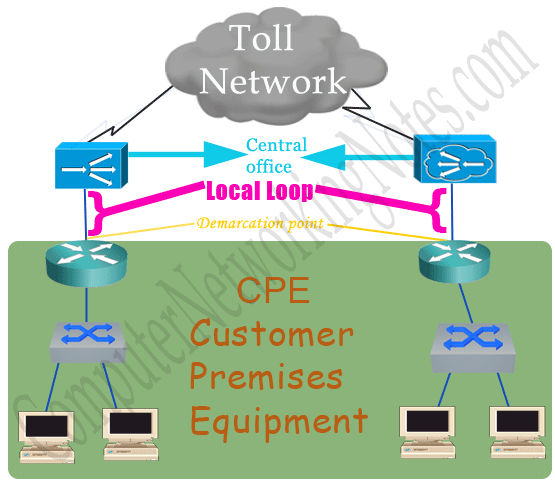 Local loop is the connection between DP and CO (central office).

This is the nearest office of Telecommunication Company. You get connection from this office.

Toll network is the internal infrastructure of Telecommunication Company for transporting your data.

A Telco (Telecommunication Company) uses several thousand kilometers of network cables and specialized networking devices to create its own network. This network provides a service that works like a crossover cable between two demarcation points but physically hidden from customer. Based on its network and customer requirement a Telco provides several types of WAN connections.

Nearly all WAN connections fall under one of following four categories:-

Leased line connection is a dedicate connection between two LANs. It simulates a single Ethernet crossover cable between local LAN and remote LAN. Just like Ethernet connection you can transmit data any time without any setup procedures. It’s an always on connection that provides guaranteed bandwidth and minimal delay. With all goodies leased line has following disadvantage:-

It uses analog modem and standard telephone system to establish dial-up connection. This is the cheapest WAN services. On another side this is most unreliable and the slowest WAN service. In this service top connection speed in USA is 53Kbps.

Typically Circuit Switched connections are used for secondary backup solution in offices as well as for temporary low speed connection in home network. As it charges per-minute, it’s not suitable for primary connection, depending on the destination: the more data we have to transmit, the more time it will take, and the more money it will cost.

Packet switched connection is the cost effective solution of leased line connection. People, who cannot afford leased line, can use this. It allows us to share bandwidth with others to save money. It looks like a leased line but charges like circuit switched line.

Yep you read it right; it looks like a leased line, not acts like a leased line. After all it’s a shared line, you will get full bandwidth if no other is not sending data at that time. But if others are also sending data at the same time then you will get congested bandwidth. Packet switched connection is the best suitable for bursty type data transmission. It is not suitable for constantly type data transmission. 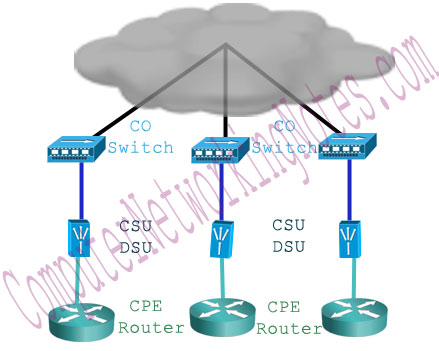 This is the enhanced version of packet switched connections. It could provide guaranteed bandwidth, minimal delay, limited number of errors and Quality of Services. This service uses fixed length (53 bytes) packets known as cell to transmit the data. If you want to connect multiple remote sites with a single router interface then Packet Switched or Cell switched connections are the best options.

Based on data transmission technology, above wan connections can be divided in two types:-

Asynchronous connection is a one way communication. Sender PC does not need to coordinate with receiver PC before sending data. Sender system simply sends data. Receiver system has to look in incoming data for decoding method and coordinate.

Synchronous connection is a two way communication. Sender PC and Receiver PC synchronize the connection before sending any user data. Once connection is established, sender system sends separate signals with every data packet regarding transmission setting (decoding method, clock rate, coordinate etc ). Receiver system also updates sender about what has been received so far with its signal.

Now we have basic understanding of WAN terms, in remaining part of this tutorial we will have quick look on most popular WAN solution.

HDLC (High-Level Data-Link Control) protocol works at Data Link layer. In comparison with other WAN protocol it creates very little overhead. It is derived from SDLC (Synchronous Data Link Control) protocol. HDLC protocol doesn’t carry any network layer information in its header. For this reason any vendor who wants to use HDLC protocol has to implement his own method to identify the Network Layer protocol. This method may not work with other vendors. Thus if we want to use HDLC protocol, we have to by all devices from same vendor.

PPP (Point to Point) protocol is wildly used data link layer protocol. It has a field for Network Layer Protocol information in its header. For this reason vendors need not change anything. They can use it as it is. If you have equipment from different vendors then use this protocol to create point to point links.

PPPoE (Point-to-Point Protocol over Ethernet) is the Ethernet solution of PPP protocol. When used with ADSL service it provides a direct connection to Ethernet interface while supporting DSL as well. In upside it provides authentication, encryption, and compression. In downside it has lover MTU (maximum transmission unit) than standard Ethernet has.

LAPD (Link Access Procedure, D-Channel) protocol was developed for ISDN. It is used to satisfy the signaling requirement of ISDN connection.

LAPB (Link Access Procedure, Balanced) was created for X.25 as connection oriented protocol at Data Link Layer. It can also be used for simple data link transportation. Due to its windowing and strict time out techniques it creates a lot of overhead.

Frame Relay uses packet-switched connection technology. It can provide bandwidth of 64Kbps up to 45Mbps. It builds logical circuit over physical circuit to transmit the data. With logical circuit we can connect multiple remote sites from single interface. Beside this it also provides dynamic bandwidth and congestion control features.

MPLS (Multi-Protocol Label Switching) is the frame relay based data forwarding technology. Just like frame relay it also uses some features of circuit switched network over the packet switched network. It uses labels (numbers) to forward the packets. Labels are assigned in the edge of MPLS network. Core routers forward packets based on these labels that make forwarding process faster. Gradually companies are moving to MPLS from frame relay.

In DSL (Digital subscriber line) service, a connection is setup between CPE (Usually modem) and the DSLAM (Digital Subscriber Line Access Multiplexer). DSLAM is a device that concentrates connections from multiple DSL lines. It is located at CO (Center Office of Telco). It uses twisted pair copper telephone wires for connectivity. It is the same phone line that is used to connect your phone with CO. In CPE side it uses DSL modem that follows DSL physical and data link layer standards to transmit data from Telco. Following figure illustrates a simple DSL service network. 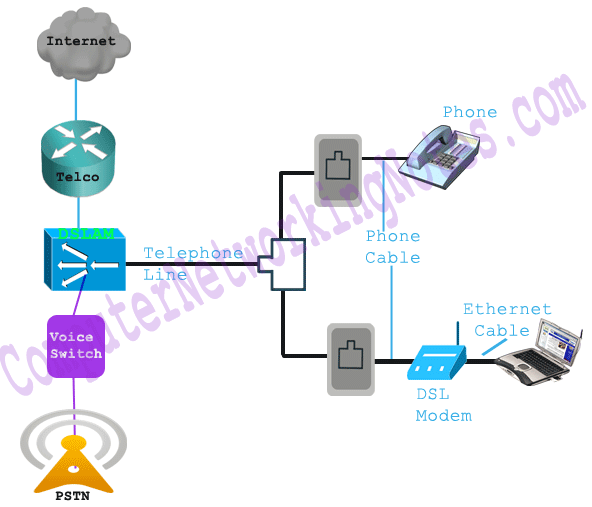 This service uses existing cable TV network for Internet. It can provide up to 27Mbps download and 2.5Mbps upload bandwidth. In this service, users connected with a certain cable network segment sharing bandwidth. For this reason actual bandwidth a user may get is 256Kbps to 6Mbps.

Output may be different on different series routers. You may get more options such as atm-dxi, lapb, smds and x25 in real Cisco router. This output is taken from a virtual router running in packet tracer network simulator software.

As output shows we have three encapsulation methods:-

That’s all for this part. In next parts of this article I will explain these protocols in details with examples.